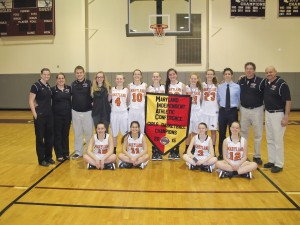 In the championship game, Maryland then went on to defeat Rockbridge Academy with a dominating 57-15 win to pull away for the school’s first MIAC Championship for girls varsity basketball.

The first quarter saw slow play from both teams with MSD leading 13 to 4.  At the start of the second quarter, MSD pulled away with a 24-0 run to go into halftime with a 37-4 lead.

MSD was able to contain Rockbridge Academy freshman standout Mayowa Taiwo, who holds the highest points scored in a game in the county, to just seven points in the championship game.  Rockbridge Academy was also without senior guard Olivia McCarrick as she sat out with an injury.