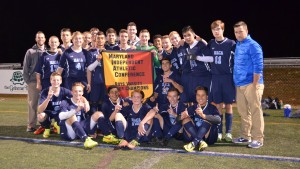 On Friday October 3rd, Mount Airy Christian Academy competed against reigning champions Greater Grace Christian Academy for the MIAC postseason championship. On a frigid night at Cedar Lane Regional Park, both teams found it hard to create opportunities against each other’s defenses. With no goals scored before half time, the teams came back out for the second half, ready for that one opportunity to give their team the win. That moment came midway through the second half as Lions striker Judge Russell chased down a ball on the left wing and placed a shot over the opposing goalkeeper. Goal Mt. Airy! With about 20 minutes left to play, the Lions held firm on defense and shut it down until the final whistle blew. Final score—Mt. Airy Christian Academy-1, Greater Grace Christian Academy -0. Congratulations to both teams on a well-played match, and congratulations to the Lions on their first ever MIAC championship!