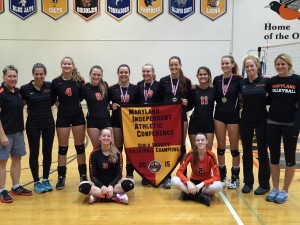 Talent can bring the team accolades and attention, but the ability to lead has brought Maryland School for the Deaf (MSD) the success that heightened beyond the court. MSD came to practice ready to compete.

One of the best highlights of the season is the 3-0 sweep over defending 2A state champion Oakdale High School. Capturing all four (4) tournaments is another highlight. MSD was 10-0 in the MIAC regular-season volleyball division.