The Force won their 1st championship under coach John Quick with a score of 45 – 37. 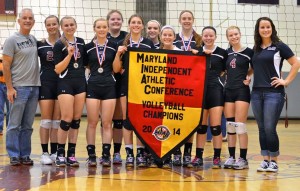 New Life won it’s first volleyball championship since 1992 defeating MSD 3-0.  New Life capped off a season in which the Lady Ram’s won a school record 20 matches, the first MIAC title and the school’s first Volleyball MCST State title on their way to a record of 22-2.Tori Bryant, Kelsi Stopyra, Amy Gust were named to the MIAC All-Tournament Team and Tirza Vick was the Tournament MVP 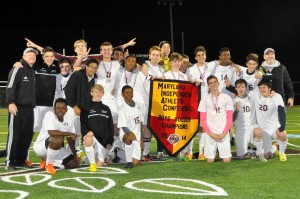 This year’s MIAC varsity boys’ soccer final was the first ever, yet it was a rematch for the two finalists:  in last year’s MCAL finals, the Rockbridge Academy Scots defeated the Greater Grace Eagles 1-0.  This year after splitting in the regular season (3-1 GG victory and 3-2 OT Rockbridge victory), Greater Grace came out on top in Friday’s MIAC championship.
The fans packed the bleachers at the new turf field at Ballenger Creek Park in Frederick on Fridaynight.  After a hard-fought first half the Scots led 1-0 after James Mackes scored a beautiful goal off an assist from Nifemi Taiwo 15 minutes into the game).  Greater Grace’s Emmanuel Pankey answered on a through ball from Zane Turk in the first minute of the second half.  With 15 minutes left in the game, Zane Turk scored his 17th goal of the season from 22 yards out to win the game for the Eagles.
The All-Tournament Team included the following Rockbridge players:  Andrew Burkhardt (goalie), Jay Wallen, Eben Mitchell and James Mackes.  Greater Grace’s players included: Zane Turk, Dan Veader, Ryan Heidenreich, and Nick Plunkett.  The Tournament MVP was Greater Grace defender, Alvin Lewis. 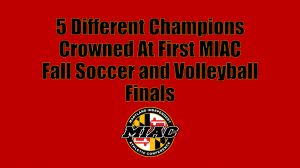 Saturday’s volleyball action was held at Greater Grace Christian Academy.  The day started with two undefeated Middle School teams meeting in the finals.  The #1 seed from the East division, Grace Christian School of Bowie, won 2-0 over the #1 seed from the West, Visitation Academy of Frederick.  The JV Final saw #1 seed Maryland School for the Deaf winning 2-0 over host Greater Grace Christian Academy.   The day’s action concluded with the 1 and 2 seeds from the West meeting in the Varsity Final.  New Life Christian School (#2 seed) won 3-0 over Maryland School for the Deaf (#1 seed) to take home the Varsity title.

Detailed stories on all MIAC Fall Finals will be posted later this week. 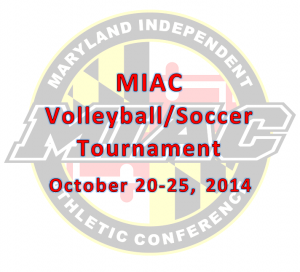 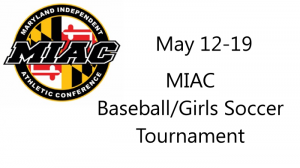 The Maryland Independent Athletic Conference will crown its first champions this May as it holds its Spring Baseball and Girls Soccer Tournaments from May 12-19.

The Maryland Independent Athletic Conference was established in November 2013 with these 11 Charter Schools: